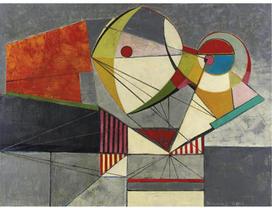 The son of a Lutheran minister who was interested in archaeology and the natural sciences, WERNER DREWES believed that art provided an avenue to understanding the mysteries of life:

What is the mystery underlying the Architecture of our Universe? What are the laws which create the pattern of the frost which forms on our windows? What causes the stars to stay in their orbit? What is it which creates joy and sorrow within us? . . . All these are problems belonging to the world we live in and which should concern the artist, as well as those problems of sunlight or the growth of a tree. But art is also a world with its own laws, whether they underlie a painting of realistic or abstract forms. . . .

To create new universes within these laws and to fill them with the experiences of our life is our task. . . . When they convincingly reflect the wisdom or struggle of the soul, a work of art is born.[1]

These words, written in 1936, provide a framework for understanding Drewes’s work throughout his life. From his student days, he was fascinated with the formal possibilities of line and color. Yet, he was unwilling to forego the profound expressive potential of thematic motifs. Drewes moved easily between pure abstraction and expressionistic figuration, occasionally using highly energized abstract forms to express powerful emotions, as in his 1934 woodcut series, It Can’t Happen Here.

Following military service in World War I, Drewes studied architecture and design in Berlin and Stuttgart. But he was soon attracted to the experimental freedom and the notion of the unity of the arts associated with the Bauhaus curriculum. In 1921 he enrolled in classes with Johannes Itten, Paul Klee, and Oskar Schlemmer. Unsettled yet as an artist, in 1923 Drewes began several years of world travel, initially to Italy and Spain, where he studied Veronese, Tintoretto, Velazquez, and El Greco. His wanderjahren then took him to Latin America (he had exhibitions in Buenos Aires and Montevideo), the United States, the Orient, and finally, via the trans-Siberia railroad, through Manchuria, Moscow, and Warsaw, back to Germany.

In 1927 Drewes returned to the Bauhaus, which had moved from Weimar to Dessau. But he found that its emphasis, as well as its location, had changed. The rather loose, experimental phase of the school’s early years had yielded to a firmer commitment to design, to the potential for uniting art and technology, and to the artist’s “new” social role in molding society.[2]

In spite of his preference for the earlier days, Drewes resumed his studies with Klee and Schlemmer. He attended Wassily Kandinsky’s weekly painting classes and became close friends with Lyonel Feininger, Moholy-Nagy, and Josef Albers. He left the following year, however, at a time when the Bauhaus was in turmoil. He worked independently and taught, and in 1930, Drewes settled in New York. Kandinsky provided an introduction to Katherine Dreier, an abstract artist and founder of the Societe Anonyme, who immediately began to include Drewes’s work in the group’s exhibitions.[3]

He subsequently taught at the Brooklyn Museum (under the sponsorship of the WPA’s Federal Art Project) and at Columbia University. In 1940 he was appointed director of the WPA’s graphic art division in New York. In 1946, after additional teaching posts at Brooklyn College and at Moholy-Nagy’s Institute of Design in Chicago, Drewes accepted a position at Washington University in St. Louis. He remained there until his retirement in 1965.

The obvious kinship between Drewes’s Pointed Brown and Floating Circles and Kandinsky’s paintings of the mid 1920s is more than a testament of respect from student to master. After a friendship begun at the Bauhaus, Kandinsky became Drewes’s artistic mentor. The two corresponded frequently in the years after Drewes settled in New York, and the young Drewes assisted with Kandinsky’s New York exhibitions. Kandinsky’s letters are filled with news of the Bauhaus, the worsening political situation in Germany, and, when Drewes sent photographs, of reactions to his recent work. Drewes’s frequent practice of painting thinly, which in this painting allows the woodgrained panel to suggest the organic movement of ocean in the sea-green foreground, is an aspect of Drewes’s technique that Kandinsky especially admired.[4]

A founding member of the American Abstract Artists (by one account Drewes showed Arshile Gorky the door when the Armenian immigrant stalked out of an early meeting), Drewes exhibited more frequently in commercial galleries and museum exhibitions than did many of his friends within the group.[5] Drewes often received positive reviews, and his work occasionally won prizes during these difficult years.[6] He remained actively involved during the organization’s early days and provided support and encouragement to his fellow abstract artists.