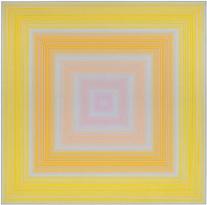 With a name synonymous with the Op Art movement, Richard Anuskiewicz first achieved international fame when he was included in a 1965 survey of “optical art” at the Museum of Modern Art in New York. Today he is recognized as one of the foremost colorists in American art, creating huge large-scale canvases.

He was born in Erie, Pennsylvania and trained at the Cleveland Institute of Art from 1948 to 1953 and then with Josef Albers at Yale University where he earned an M.F.A. degree in 1955. Albers stirred his interest in the effects of color on perception but Anuszkiewicz did not actively pursue this matter until the 1960s when he worked in repeated geometric patterns, emanating in wave-like shapes from the center of the canvas.

In the 1970s, much of his work looked like computer printouts and were intended to investigate the effects of juxtaposed full intensity colors. Unlike many Op-Art artists, his paintings are pleasing to the eye with smooth surfaces, and they give the impression that the design will continue beyond the framed edges.

In January 1999, a retrospective of his work was held at the Boca Raton Museum of Art in Florida.