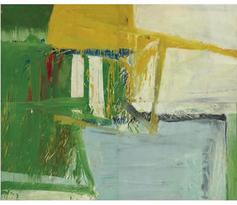 Alfred Leslie, born in New York City in 1927, began as an Abstract Expressionist painter, but in the 1960s moved to an intense, large-scale realism. He studied at New York University in 1946-57 with Tony Smith, Hale Woodruff, John McPherson and William Baziotes. Unlike most artists who spend years struggling to establish themselves, Leslie quickly gained a reputation as a second generation Abstract Expressionist. When he made his transition to realism, he was as easily recognized in that genre.

Geometric abstraction and collaged realistic elements were sandwiched between Leslie’s initial Abstract Expressionism and the ultimate realism of his artistic evolution. The process was completed in the course of only two or three years in the mid-1960s. All of Leslie’s paintings, whether abstract or realistic have tended toward monumental size. His portraits may be as large as nine feet high, and are painted with a metallic hardness of surface rather than the softness of flesh.

In the 1970s the artist returned to realism and sought to link timeless spiritual beliefs and past artistic tradition with the present in the creation of a contemporary context for biblical subject matter and the themes and compositions of Caravaggio.

Sources:
Matthew Baigell, Dictionary of American Art
Michael David Zellman, 300 Years of American Art
———————————————————————-
Alfred Leslie was born in the Bronx, New York City, on October 20, 1927. He attended New York University from 1946 through 1947, the Pratt Institute in Brooklyn and the Art Students League, where he studied with Tony Smith, William Baziotes, Hale Woodruff and John McPherson. He served in the United States Coast Guard in 1945 and 1946. He taught at a Adult Education Program in Great Neck, New York from 1956 through 1957 and at the San Francisco Art Institute during the summer of 1964.

A second-generation Abstract Expressionist, Leslie turned to figure painting in the early 1960s, long before the movement toward figure painting was fashionable. His technique as a draftsman is formidable. He experimented with filmmaking, writing, set designing and photo-realism in the 1950s and 1960s.

Leslie is a slight, loquacious, one-time physical-culture enthusiast. His wife, Constance West, often poses as a model for him.