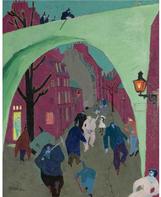 An abstract modernist, Lyonel Charles Adrian Feininger was part of the German avant-garde of the early twentieth century and one of the early teachers at the Bauhaus in Weimar, Germany in 1919, founded by architect Walter Gropius. In 1921, he had a joint exhibition with Paul Klee at the Weimar Museum.

Feininger was born in New York City to German Jewish parents, son of violinist Karl Feininger and singer Elizabeth Cecilia (Lutz) Feininger. He moved to Germany in 1887 intending to study music but taking drawing lessons in Hamburg instead. He moved to Berlin in 1888, enrolling at the Royal Academy of Art. At the request of his father, he moved to Belgium in 1890, attending the Collège Saint Servais in Lüttich, but returned to Berlin the following year, continuing his studies at the academy. Besides painting, Feininger did become an accomplished pianist and composed fugues, which reflected his art that explored interrelationships, synchronization, overlapping in the building of an overall sense of order.

He remained in Germany until 1936, where he had begun working as an illustrator of children’s books and as a political cartoonist for several periodicals in 1889. From 1906 to 1908, he lived in Paris, and focused on his painting, studying at the Academie Colarossi. Upon his return to Berlin, Feininger joined the “Berliner Secession” group. In 1911 he exhibited eleven works at the “Salon des Indépendants” in Paris, and through his friendships with Jules Pascin and Robert Delaunay he became interested in Cubism and Orphism. Upon his return to Germany, the architecture of German towns with their Gothic cathedrals became subject of his painting, and in 1913, he left the “Berliner Secession”. While Feininger had already befriended Kandinsky and Klee of the “Blaue Reiter” in 1912, he did not become a member of the group.

In 1919, he was invited to join the faculty of the Bauhaus in Weimar, where he served as the first artistic director of the printing shop. His woodcut titled The Cathedral of Socialism served as a cover design for the Bauhaus manifesto by Gropius. Feininger remained at the school, which moved to Dessau in 1926. Hitler closed the school in 1933, and in 1936 Feininger followed an invitation to teach at Mills College in Oakland, California. Returning by the end of the year, he permanently moved his family to New York in 1937, teaching again at Mills College during the summer.

Under the Nazi regime Feininger, whose work had been widely exhibited and collected, became one of the many modern German artists whose work was banned and removed from public view. After he permanently left Germany in 1937, several of his paintings that had been confiscated were shown in the Nazi government exhibition of “Degenerate Art” held in Munich in 1937.

In 1939 Feininger was invited to create murals for the New York World’s Fair, and he found his new subject matter in the urban landscape of New York. His work found much acclaim and is represented in museums in the U.S. and abroad.