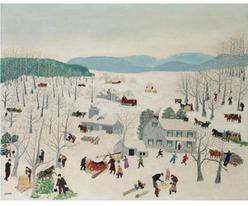 Anna Mary Robertson Moses was born in 1860 in Greenwich, New York. Most of her life was spent in eastern New York State where she was the child of a Scottish-Irish farm family and led what she later described as a very happy childhood. Her father encouraged her to draw and paint on unused newsprint, which he brought home to keep the children busy, and she used berry juice to brighten her pictures. She never went beyond the “sixth reader” in school.

At age twelve, she became a hired girl, learning household arts. She married Thomas Salmon Moses, who was a hired man; she was a conventional farm wife, living with him on a large farm near Staunton, Virginia and bearing ten children, but only five survived. She loved the scenery of the Shenandoah Valley, but never had time to paint it while she lived there. She and her husband returned to New York State to a dairy farm in the small village of Eagle Bridge, where she spent the remainder of her life. Occasionally she did paintings for holiday gifts, but never took it seriously. However, her husband gave her work much praise, and after his death, when she was in her seventies, she was too weak for hard labor, so she filled her time with stitchery landscape pictures.

Although she had never painted seriously until she was seventy-seven, and had no formal training whatsoever, the pictures of this farm woman, whose life since childhood has been one of hard toil, have captured the critics, enchanted the public and made her, from her own standards at least, a rich woman. When her doctor ordered her to rest because of her neuritis and arthritis, she started painting “to keep busy and out of mischief.” She painted in the early part of the day and worked on several paintings at one time, all from imagination and memory.

At her best, Grandma Moses was no ordinary primitive. She had in her mind a shadowless world of dancing images and these she painted on Masonite with a freshness of vision that seemed eternally young. She became in her lifetime a national institution, a witty doughty lady who seemed to recall something about America that America missed. She painted from memory, but never of sickness, poverty or death. Her paintings numbered more than 1500; they were shown in more than 150 exhibitions in the United States and in five one-man shows abroad.

She made the covers of Life and Time magazines. She was interviewed on radio and television. Her works were reproduced on collector’s plates, fabrics and millions of greeting cards.