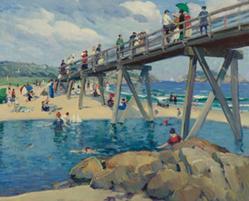 Leon Kroll remained a painter of realism at a time when the American art world was moving rapidly into abstraction and other styles that fell under the general term of modernism. Nevertheless, asserting that he liked easy-to-recognize subjects that created a sense of that which was warm, sympathetic, and romantic, he was a leading artist of his time painting lush landscapes, figures, and still life. Other subjects such as his industrial scenes and cityscapes had elements of social realism and were painted with a heavier brush than his other works. He was especially focused on the human figure, and many of them seemed dreamlike in filmy dresses reclining in landscapes.

Kroll was born in New York City in 1884. He first studied at the Art Students League under John H. Twachtman, and in 1904 entered the National Academy School, winning the Academy’s premier award in 1908. To earn money, he worked as a janitor and did mechanical drawing.

He traveled to Paris in 1908, where he studied at the Academie Julian as a student of Jean-Paul Laurens, and exhibited at some of the major Paris exhibitions. While in Paris, he came under the influence of the Impressionists and was especially taken with the works of Paul Cezanne.

When Kroll returned from Europe in 1910, he mounted a one-man show of his Parisian work. The exhibition was a critical and financial success.

Kroll began to paint views of New York in 1918, a subject that fascinated him for the rest of his life. George Bellows, who not only became a friend but also exerted a strong influence upon Kroll’s work, was an admirer of his art. Through Bellows, Kroll was introduced to the Eight and began exhibiting with them at the MacDowell Club. He also traveled to paint including to Rockport and Gloucester, Massachusetts; Monhegan Island in Maine; and in 1917, he joined his friends Robert Henri, and George Bellows in Santa Fe, New Mexico.

During the 1930s, he worked for the WPA on murals for the Department of Justice Building.

Kroll maintained an apartment at 253 West Forty-second Street in Manhattan, from which he painted several views of New York scenes.