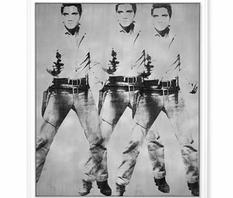 Andy Warhol, whose name is synonymous with Pop Art*, was born in Pittsburgh, Pennsylvania, and grew up in McKeesport, Pennsylvania. He studied art at the Carnegie Institute of Technology from 1945 to 1949. He then went to New York City where he became an illustrator until 1960 when he began making paintings based on comic strip characters such as Popeye, Dick Tracy, and Superman.

He turned from the prevailing Abstract-Expressionist* styles and the emphasis on the artist’s emotion to a hard-line Realism*, using many common images associated with the popular media such as a Campbell Soup can or a Coca-Cola bottle or Brillo pad. The first images were handpainted, but many were reproduced with a silk-screen process. He became the “first artist to utlize the screenprint medium to elevate both common and famous photographic images from popular culture to fine art status.” (Falk Vol III, p. 3465)

In May, 1999, ARTNews magazine named him one of the twenty-five most influential artists-ever. About him, it was written: . . . “it all began with the first Campbell’s soup can in 1962. . . With this simple image, the concepts of appropriation and commidification were let loose for good. Warhol’s celebration of his screen sirens, hustler hunks, and cafe-society wanna-bees . . .had an equally dramatic effect.”

In 1964, Warhol began making sculpture, often with labels from supermarkets, and in the 1970s, he turned to portraits, some of the most famous being Jackie Kennedy, Elvis Presley, Mao Tse Tung, and Marilyn Monroe. These images reflected his fascination with the topic of death, something he carried into a series called Death and Disaster, that included depictions of car crashes and gang warfare. Many celebrities and socialites regarded it as a notch ‘up-the-ladder’ of social recognition to be painted by Warhol.

He died in New York City in 1987 from gall bladder surgery that no one expected to be complicated.

Sources:
Matthew Baigell, “Dictionary of American Art”
Peter Hastings Falk, Editor, Who Was Who in American Art
ArtNews, May 1999