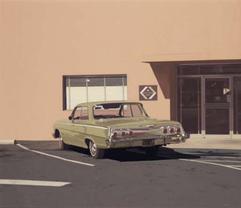 Robert Bechtle, who lives and works in Berkeley, California, was part of the photo-realist movement on the West Coast along with other well-known ‘new realists’ such as Paul Wonner, Richard McLean and Ralph Goings. Differing from East Coast photo realists who did studio still lives and figures, these artists painted outdoor landscapes such as cars parked on streets, home exteriors, and streetscapes. Often Bechtle’s paintings have no direct human presence but ever the suggestion that people are nearby.

Photo-realists, a term coined by Louis Meisel, an East Coast dealer, depict everyday scenes in perfect detail emulating a photograph. The process involves using a photographed image and projecting it onto a canvas, then tracing the lines and objects. Once the paint is applied, the result is a highly realistic interpretation of the actual scene.

Unlike some photo-realists, Bechtle used paint as texture in his paintings, and one can barely detect brushwork in his photo-like renditions. He took inspiration from his local San Francisco surroundings, painting neighborhoods, friends, family, and street scenes, paying special attention to automobiles. His paintings reveal his perspective on how things look to him, the color and the light of a commonplace scene.

Bechtle was born in San Francisco, California in 1932. He started drawing at a young age and with encouragement from his teachers and family, pursued a future as an artist. After high school, Bechtle enrolled in the California College of Arts and Crafts in Oakland, California where he studied Graphic Design for four years. He received a Bachelor’s degree in Art and a Master’s degree in Fine Art after his graduate work in painting.

In May to October 2000, the Oakland Museum held a retrospective of Bechtle’s paintings, “California Classic: Realist Paintings by Robert Bechtle”.