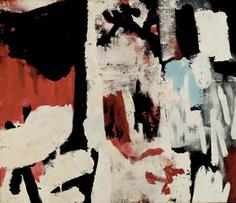 A painter of both Social Realism and Abstract Expressionism and part of the so-called New York School, James Brooks did many large-scale paintings that expressed a sense of cosmic space as though a high-powered telescope were penetrating space so deeply that one feels the color, the form, and the surge of movement. He used much black, so that darkness seemed equal to the other colors of his canvases and conveyed a sense of void amongst floating and colliding bright colors.

He was born in St. Louis, Missouri, and during his childhood, moved frequently throughout the Southwest. In the mid and late 1920s in Dallas, Texas, he attended Southern Methodist University and the Dallas Art Institute where he studied with Martha Simkins.

In 1926, he moved to New York City and worked as a commercial lettering artist, while taking night classes at the Art Students League from 1927 to 1930. From 1931 to 1934, he traveled and painted in the American West and Southwest, painting in a Social Realist style.

Between 1936 and 1942, he worked on murals for the WPA Federal Art Project including ones for Queensborough Public Library, Woodside Branch Library, and La Guardia Airport. The LaGuardia mural called Flight, later destroyed, was especially impressive and huge–12 feet by 235 feet. He served in North Africa as an army artist during World War II, and the end of this service also marked the end of his painting in realistic styles.

In 1949, having observed Jackson Pollock’s drip style, Brooks experimented with pouring pigment on the back of un-sized canvas, and became much lauded for his achieving of balance between spontaneity and control. In 1953, he abandoned that technique for much more densely packed, tightly controlled structure resembling Cubism. In the early 1960s, he added linear calligraphy to his painting.

From 1947 to 1975, Brooks taught at various colleges and universities including Pratt Institute, Columbia University, and Cooper Union in New York City, the Art Center in Miami, Yale University, and the University of Pennsylvania. In 1963, he was artists in residence at the American Academy in Rome and in 1967 had a Guggenheim Fellowship.