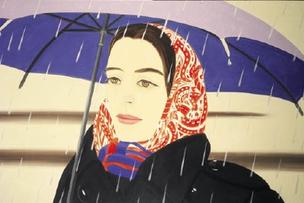 The son of Russian immigrants, Alex Katz was born July 24, 1927 in Brooklyn, New York and raised in Queens in a liberal, Bohemian setting. He is a figure painter of realistic portraits of friends and family, and his figures are usually relaxed close-ups from a frontal perspective and appear in a flattened manner. With his artwork, he strives to convey the feeling that it is good to be alive. It has been said that his style highly influenced the popularity of New Realism in the 1970s. Along with his associates Al Held and Philip Pearlstein, and others who were struggling against the ‘titanic presences of Pollock and de Kooning’ and other abstract expressionists.

Katz studied three years (1946-49) at Cooper Union and Skowhegan School of Painting and Sculpture in Skowhegan, Maine from 1949-50. During the 1960s, he was an art educator with teaching positions in New York City at the New York Studio School and School of Visual Arts; in New Haven at Yale University; and in Brooklyn at Pratt Institute. He also supported himself by making hand-carved frames and designing stage sets and costumes in 1960 and 1964 for the Paul Taylor Dance Company for their performances at the Festival of Two Worlds in Spoleto, Italy.

By 1954, Alex Katz had his first one-person show at the Roko Gallery in New York. The following year he began making cut paper collages. His wife, Ada, has been his model since they married in 1958. He works from a studio in SoHo, and they have lived in the same loft since 1968.

1974
Alex Katz Prints, a traveling exhibition at The Whitney Museum of American Art

1986
Alex Katz, a traveling retrospective exhibition at The Whitney Museum of American Art

1988
Alex Katz: A Print Retrospective at the Brooklyn Museum of Art

1996-98
Alex Katz Under the Stars: American Landscapes 1951-1995, organized by the Institute for Contemporary Art/P.S. 1 Museum, opens at the Baltimore Museum of art; traveling to the Norton Museum of Art, West Palm Beach Florida; the Portland Museum of Art, Portland, Maine; and P.S. 1 Museum, New York

2000 Regarding Alex Katz at Carnegie Museum of Art , Pittsburgh.