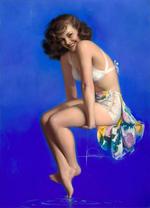 Rolf Armstrong is best known for the calendar girl illustrations he produced for Brown and Bigelow’s Dream Girl in 1919. Sometimes labeled the father of the American pin-up, his pastel illustrations set the glamour-art standard for feminine beauty that would dominate the genre for the next four decades. He was also noted for his portraits of silent film and motion picture stars as well as for his pin-ups and magazine covers.

Armstrong was born in 1889 in Bay City, Michigan and settled in Bayside, New York on the shore of Little Neck Bay, while keeping his studio in Manhattan. His interest in art developed shortly after his family moved to Detroit in 1899. His earlier works are primarily ‘macho’ type sketches of boxers, sailors, and cowboys. Armstrong had previously been a professional boxer and accomplished seaman, and the ruggedly handsome artist was seldom seen without his yachting cap. He continued to sail his entire life and could be found sailing with movie stars such as James Cagney when the Armstrongs were in California. In fact, he was a winner of the Mab Trophy with his sailing canoe “Mannikin” and competed in other events at the Canoe championship of America held in the 1000 Islands in New York.

Armstrong left Detroit for Chicago to attend the Art Institute of Chicago. While he was there he taught baseball, boxing, and art. New York became Armstrong’s next home and magazine covers became his primary focus. His first was in 1912 for Judge magazine. He later created artwork for advertisements, such as Oneida Silverware, as well as calendars, and sheet music. He made contributions to periodicals such as College Humor, Life, and Shrine Magazine. He became noted for his portraits of silent film and motion picture stars as well as pin-ups and magazine covers.

Armstrong moved to Hawaii in 1959 after his retirement from painting years before. He died in February 1960.