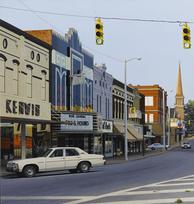 A contemporary realist painter especially known for his brightly-neon lit art-deco theatre exteriors, Davis Cone is part of the movement reclaiming realism as a strong part of American art. With his acrylic theatre depictions, he has chosen his subject matter to celebrate one of the disappearing icons of early 20th-century American life, but it appears that this subject became an increasing interest of Cone as his early works, although focused on architecture of old buildings, are not restricted to Art-Deco movie theatres.

His working method is meticulous, with him completing only four to five paintings a year. He combines elements of various photographs of a particular theatre, and then present the image as though frozen in time and devoid of human presence but with obvious weather conditions. Although some of the big-time famous movie houses appear in his paintings, many of them are from small towns such as the Hollywood Theatre in Litchfield, Minnesota, and Wink Theatre in Dalton, Georgia. “The theaters Cone chooses as subjects tend to be small and to show alternative films, indicating that they are representatives of a dying culture.” (Katz)

One of his subjects is Loew’s Atlanta, the movie theatre in Atlanta Georgia that was the site of the premier of the movie Gone with the Wind, and that burned in 1978. On the marquee in this painting, Cone has written what seems to be an apt message about what is happening to the Art Deco movie theatres in America: ‘Curse the Dead’ and ‘Scream Bloody Murder’. Other movie titles that he has placed on marquees in his paintings are ‘The Survivors’, ‘Sudden Death’, and ‘Seems Like Old Times’.

Also Davis Cone quite often places his signature in subtle places on his paintings such as on a car parked in front of Park Theatre.

Cone is a native of Augusta, Georgia and because of his focus on Realism, was denied admission to the University of Georgia Fine Arts School. He began exhibiting in his region 1977. Within a decade, he had exhibition venues far beyond Georgia including Germany, Spain, and Japan as well as many cities in America. One-person museum exhibitions include the Georgia Museum of Art in Athens and the Hunter Museum of Art in Chattanooga, Tennessee. His work was in the group exhibition, “American Photorealism” at the Zummerli Art Museum at Rutgers University and The Seavest Collection of Contemporary Realism at the Neuberger Museum of Art in Purchase, New York.