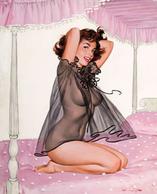 An illustrator for many national magazines, Arthur Sarnoff was known for illustration and paintings, which were whimsical and attention getting because of their reflection of many aspects of American culture—product consumption, domestic life, sports, celebrities, sex, crime and musical entertainment.

Sarnoff was born in Brooklyn and studied at the Industrial School and the Grand Central Art School* in New York City. Among his teachers were John Clymer and Andrew Wyeth. He was a member of the Society of Illustrators* and exhibited widely including the National Academy of Design*.

He also did portraits of President and Mrs Kennedy. Two subjects continue to keep him famous: popular and tasteful pin-up girl calendars and the pool playing (and card playing and golfing) dogs, of which The Hustler became one was the best-selling prints of the 1950s.

He usually signed his art by using his full name or “Sarnoff,” or just “AS.”

In honor of Sarnoff’s 70th birthday in 2001, his two daughters, Susan and Elizabeth, set up the Arthur Sarnoff Alumni Financial Aid Fund at the Ethical Culture Fieldston School in Central Park, New York City. A children’s school attended by Sarnoff’s daughters, the school remained of special interest to Arthur Sarnoff and his family.