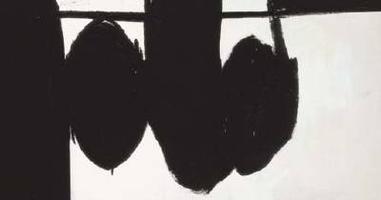 Robert Motherwell was born in Aberdeen, Washington, of Scotch-Irish ancestry; the son of a bank president who moved the family to San Francisco when Robert was a child. At the precocious age of eleven he received a scholarship to Otis Art Institute in Los Angeles. He earned his bachelor’s and master’s degrees in philosophy from Stanford University and worked on his doctorate from Harvard, afterwards studying at the University of Grenoble in France and at Columbia University.

Motherwell was a man respected not only for his art but also for his writings, scholarship and personal presence. He was the last, the youngest, of the Abstract Expressionists which included Willem de Kooning, Adolph Gottlieb and Clyfford Still. He was an acknowledged master of the medium of collage. He painted in series, a group of paintings of similar technique and colors, like his Spanish Elegies.

From 1958 to 1971 he was married to his third wife, Helen Frankenthaler. His fourth wife was Renate Ponsold, an artist-photographer; they had two daughters and one grandchild. They lived in Greenwich, Connecticut in a carriage house with a hayloft aerie, a beautiful old barn and a guest cottage adjoining a one-hundred foot long studio.

He died on July 18, 1991. He had suffered a stroke at his summer home in Provincetown, Massachusetts and died on his way to the hospital.