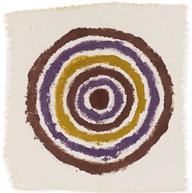 Following is the New York Times obituary of the artist:

Kenneth Noland, whose brilliantly colored concentric circles, chevrons and stripes were among the most recognized and admired signatures of the postwar style of abstraction known as Color Field painting, died Tuesday at his home in Port Clyde, Me. He was 85. The cause was cancer, said his wife, Paige Rense, the editor in chief of Architectural Digest.

Mr. Noland arrived on the scene in the immediate aftermath of Abstract Expressionism. A student of the geometric abstractionists Josef Albers and Ilya Bolotowsky, he found his way toward geometric forms that served as vessels for vibrant washes of color stained into the canvas. In successive series of paintings, he introduced subtle changes into geometric forms that evolved from circles, chevrons, stripes and diamonds and back again to the circle late in his career.

Of Mr. Noland’s concentric-circle paintings, he wrote in Art International: “His color counts by its clarity and its energy; it is not there neutrally, to be carried by the design and drawing; it does the carrying itself.”

“He was one of the great colorists of the 20th century,” said the art critic Karen Wilkin, the author of a monograph on Mr. Noland. “Along with Morris Louis and Helen Frankenthaler, he invented a new kind of American abstraction based on the primacy of color. It had some of the philosophic underpinnings of Abstract Expressionism, but without the Sturm and Drang. He picked up where Matisse left off and moved painting into a new visual language.”

Kenneth Clifton Noland was born on April 10, 1924, in Asheville, N.C. His father, a pathologist and Sunday painter, lent the boy his art materials after a visit to the National Gallery in Washington, where Kenneth, then 14, was awe-struck by the Monets.

He was drafted into the Army in 1942 and served in the Air Corps as a glider pilot and cryptographer. Toward the end of the war he was stationed in Egypt and Turkey.

After World War II he enrolled in Black Mountain College, an experimental school not far from his hometown. Albers’s quasi-scientific color theory dominated the painting curriculum, but Mr. Noland gravitated toward the less doctrinaire Bolotowsky and fell under the influence of Paul Klee, whose colorful surrealist fantasies loomed large in Mr. Noland’s first exhibition, at a Paris gallery in 1949.

In 1950 he married Cornelia Langer, a former student of the sculptor David Smith. The marriage ended in divorce, as did his second marriage, to Stephanie Gordon. In addition to Ms. Rense, he is survived by two sons, William Noland of Durham, N.C., and Samuel Jesse Noland of Barnstable, Mass.; two daughters, Cady Noland and Lyn Noland both of Manhattan; a brother, Neil, also of Manhattan; and a grandchild.

Exposure to the work of Matisse in Paris profoundly affected Mr. Noland’s ideas about art and inspired him to develop what he called “color structure.” Returning to the United States, he settled in Washington, where he taught at the Institute of Contemporary Arts and the Catholic University of America, and became friends with the somewhat older Morris Louis, a fellow teacher at Washington Workshop Center of the Arts, an evening art school.

Both men, under the influence of Ms. Frankenthaler, began experimenting with stain technique, thinning their paint and applying it to unprimed canvas to create translucent layers of color that revealed the canvas surface. This approach dovetailed perfectly with Greenberg’s dictum that the destiny of painting, as it approached pure self-referentiality, was to become ever flatter.

Greenberg included him in his “Emerging Talent” exhibition at the Kootz Gallery in Manhattan in 1954, and his painting “In a Mist” (1955) was selected by Dorothy Miller for her traveling exhibition “Young American Painters,” organized for the Museum of Modern Art in 1956. In 1957 he was given his first one-man show, at the Tibor de Nagy Gallery.

Working on large canvases, Mr. Noland moved toward more geometric forms and harder edges in the late 1950s, initially exploring the emotional possibilities of color in concentric rings of varying width that seemed to pulsate toward the edges of the canvas.

In the early 1960s he began using ovoid shapes, and from there he progressed to chevrons, horizontal stripes and plaidlike arrangements of crisscrossing lines. In the late 1990s he returned to his early signature, the circle, this time painted on a colored ground. He also experimented with shaped canvases, often in a lozenge shape.

In 1963, after a year living in New York, he moved to a farm in South Shaftsbury, Vt., formerly owned by Robert Frost. There he entered into a close working relationship with the painter Jules Olitski and the British sculptor Anthony Caro, who taught at Bennington College nearby.

In 1977, the curator and art historian Diane Waldman organized a retrospective of Mr. Noland’s work at the Solomon R. Guggenheim Museum. Hilton Kramer, reviewing the show in The New York Times, called it “an immense bath of chromatic delights,” although he expressed reservations about what he saw as Mr. Noland’s odd combination of hot color and cool emotion.

He also zeroed in on Mr. Noland’s careerlong commitment to pure form and color. Regardless of the geometric form, he wrote, “Mr. Noland has been consistent and unvarying — not to say single-minded — in his artistic purpose, which has been to fill the canvas surface with a pictorial experience of pure color.”

With the rise of Pop Art, Minimalism and postmodernism Mr. Noland’s work, with its formalist rigor, fell out of critical favor. “Starting in the 1970s, there was a terrific reaction against Color Field painting and abstract art in general, which was in turn a rejection of Clement Greenberg,” said the art historian and critic Michael Fried, who organized the exhibition “Three American Painters: Kenneth Noland, Jules Olitski, Frank Stella” at the Fogg Art Museum at Harvard in 1965. “He remains a great painter.”

Mr. Noland continued to pursue his high modernist program, undeterred and confident about the future of abstract art. “It’s a fertile field that we barely have explored, and young artists will return to it,” he said at a symposium in 1994. “I’m certain.”

The forecast for Noland pieces seems flat, auction results show pieces selling at or below estimates.