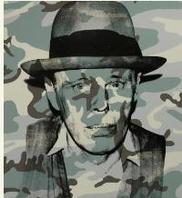 Joseph Beuys was born on May 12, 1921 in the little town of Cleves in the Northwestern corner of Germany, near the Dutch border. (Beuys is a Dutch name; it rhymes with “voice”). He grew up in the troubled years of post World War I Germany. He worked on farms as a boy, as an adolescent he joined a traveling circus. At nineteen, he was conscripted into the Luftwaffe and was injured several times. In 1945 he turned to sculpture and painting.

His drawings and paintings were exploratory studies of natural forms. In 1947 he enrolled at Dusseldorf Academy of Art. From 1951 to 1954 he worked at sculpture and drawings at his own studio in Dusseldorf. On September 19, 1959 he married Eva Wurmbach, an art teacher; they have a daughter, Jessyka. They also had a son.

In 1961 he was appointed Professor of sculpture at the Dusseldorf Academy of Art. Although he has often been ranked “somewhere between clown and gangster” by ultraconservatives and is always a controversial figure, he is totally serious in his conception of the artist as educator and political philosopher.

Though Beuys called himself a sculptor, he engaged in many media, including drawing, performance and installation art. The one constant was his embrace of discarded materials, especially felt and animal fur, all seemingly drawn from the ruins of a devastated land. Beuys died on January 23, 1986 in Dusseldorf

Written and compiled by Jean Ershler Schatz, artist and researcher of Laguna Woods, California.
Sources include:
World Artists, 1950-1980 by Claude Marks
Mark Rosenthal in ARTnews, May 1999
David Sylvester in Art in America, April 1999
From the internet, Artchive.com