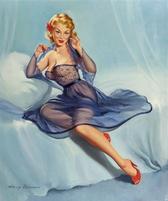 Harry Ekman was born in Chicago, Illinois in 1923. He was trained at the American Academy or Art and the Art Institute of Chicago. His early influences were Gil Elvgren, Haddon Sundblom, Joyce Ballantine and others. Ekman initially apprenticed with Sundblom who was a close family friend and for Elvgren. By 1960, Ekman was making a transition from commercial illustration and pin-up art to portraiture. The rest of his career was devoted to gallery works and portraits. He died in Medford, New Jersey in 1999.