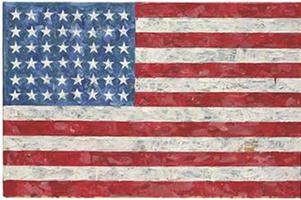 Painter, sculptor, and printmaker Jasper Johns became one of America’s best-known post-Abstract Expressionists and Minimalists. His name is most associated with pictorial images of flags and numbers, Pop-Art subjects that he depicted in Minimalist style with emphasis on linearity, repetition, and symmetry. Johns completed his first flag painting in 1955, alphabet subjects in 1956, sculpture in 1958, and lithographs in 1960.

Unlike Abstract Expressionism, these signature works seem removed from the artist’s emotions. They are modernist in that they lack traditional perspective, focusing on inter-relationships of color and shapes, but are realist in that they have recognizable subject matter.

Born in Augusta, Georgia, Johns grew up in South Carolina, with no formal art training but did attend the University of South Carolina for two years. In 1949 he moved to New York City but was drafted into the Army. Returning to New York, he began experimenting with styles, and “Flag”, dated 1955, earned him his first major attention. It was revolutionary in that it was simply a geometric design on a large canvas, divorced from emotional or political connotation.

His flag paintings are credited as key in the development of Minimal Art in that the focus of these pieces was their linearity and uniformity with de-emphasis on the unique creative talents of the artist. For Johns, major influences on this Minimalist style were his friendships with dancer Merce Cunningham, composer John Cage, and artist Robert Rauschenberg.

Over the next few years, Johns used the same approach with other images that were traditional symbols. In 1956 to 1957, he added numbers to his paintings; in 1958, he did his first sculpture of mundane objects; and in 1960, he executed his first lithographs.

In 1959, his work became increasingly abstract, influenced by Surrealism and Dadaism, with surfaces complicated by combining bold colors with letters and other symbols, some of them obvious such as maps and others hard to read. He created assemblage, and from 1972, used a cross-hatching method.

In 1997, a major retrospective of 225 of Johns’ work was held in New York at the Museum of Modern Art, organized by Kirk Varnedoe. Following this, he began a new series that was much more muted, mysterious, and serene than his earlier work. The exhibition of these paintings debuted on September 15, 1999 at the San Francisco Museum of Modern Art and traveled to the Yale University Art Gallery in January 2000 and then to the Dallas Museum of Art.

In the late 1990s, Johns has been working from a restored barn near Sharon, Connecticut and pursues a hobby of raising bees.