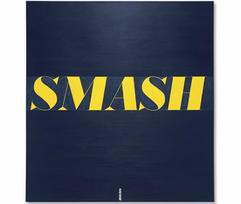 Edward Ruscha was born on December 16, 1937 in Omaha, Nebraska. He was brought up in Oklahoma. In 1956 Ruscha drove west from Oklahoma City with songwriter Mason Williams. At the time he was doing monosyllable word paintings, as well as the paintings of gas stations, sunsets and the Hollywood sign. He studied at the Chouinard Art Institute in Los Angeles under Richard Rubin from 1956 through 1960. He served in the United States Navy in Los Angeles at about the same time.

He married Danna Knego, and in 1968 their only son, Edward Joseph Ruscha V, was born. They called him Frenchy. In 1977, Ruscha and Danna were divorced, but ten years later they remarried. They live in a low-slung ranch house high in the Santa Monica Mountains. When their next door neighbors moved out, they bought that house, and remodeled the two houses together into a larger rambling one that suited them to perfection. In addition Ruscha maintains a warehouse-sized studio in Venice, California and a getaway house in Palm Springs.

Ruscha’s art elaborated language and popular culture and his quirky approach to art made his work difficult to categorize. A truly remarkable fact is that despite his success over the years he often had exhibitions in which not a single painting was sold. He took this as a matter of course and eventually his work sold, although it sometimes took several years. He is very prolific; he paints and draws, using unexpected materials in unexpected ways; photography looms very large in his choice of media and through it all, words. He records the contemporary scene in all its flavors.

He lectured on painting at the University of California at Los Angeles in 1969 and 1970. When Frenchy was twenty, they modeled together in magazine ads for the Gap clothing store chain. He has appeared in several movies.

“The Last Word” by Ralph Rugoff in ARTnews magazine, December 1989