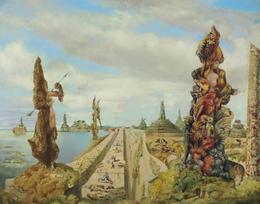 Max Ernst was born on April 2, 1891 in a small Rhineland town called Bruhl, outside Cologne. His father, a fiercely authoritarian Roman Catholic, was an amateur painter who taught at a school for deaf-mutes. From earliest childhood, Ernst seems to have acquired haunting visual images which became factors in his work throughout his life. He was a nervous impressionable boy, in constant friction with authority. During an illness, Ernst stared at the wood flooring and ended up discovering a new painting technique that he called “frottage.” He took paper and pencil, laid them over the textured surface and scribbled away. Allied to this was Ernst’s use of paint sponged and knifed on a canvas, with the images it suggested sharpened with a brush.

Ernst went to the University of Bonn, studying philosophy and psychiatry at a time, 1909, when the subject was barely asknowledged as a discipline. After serving in the German artillery in World War I, he continued painting, and eventually reached Paris at a time when Dada was in full swing and Surrealism was about to be born. He first was involved in a menage-a-trois with French poet Paul Eluard and his wife Gala (Salvador Dali’s future spouse). Ernst’s first wife was the art historian Luise Strauss, who bore him a son, Jimmy. He then married high-strung Marie-Berthe Aurenche, who reveled in her status as an illegitimate descendant of Louis XVI. In the late 1930s, having left his wife and disassociated himself from the Surrealists, Ernst spent an idyllic interlude renovating an old farmhouse with his then-lover, painter Leonora Carrington. In 1939, he was held in a French prison camp on the false accusation that he was spying, He escaped, only to discover that Leonora Carrington had had an emotional breakdown. She had sold his house for a bottle of brandy, leaving him homeless.

In 1940 he took refuge in New York and married the heiress and art patron Peggy Guggenheim a year later. After the war ended, he divorced Peggy, married artist Dorothea Tanning and built a house in Arizona. Life there resulted in a magnificent series of Arizona mountains, bleak and burning under their immobile suns.

Ernst had a distinct prophetic faculty; immersed in the 20th century and lacking any nostalgia, he could feel what was coming. His predictive powers also had to do with art style itself. He made some small paintings by swinging a punctured can of paint on a string above a canvas flat on the floor; the resulting pattern of drips clearly anticipated Jackson Pollock. There was no chance technique – staining, rubbing, splashing, accidental manipulation, transfer blots – that Ernst did not pioneer. His was one of the most durable and fertile talents of our entire culture, a great enemy of the trivial, the bogus and the solemn.

Eventually, Ernst migrated back to Europe and a small house in the south of France, where he did lithographs and engravings. He continued working long after the Dada and Surrealist movements were history. He was the master of invoked accident and controlled chance and even past eighty years old, was still inventing. Ernst was never a leader in any serious, ideological sense. Despite his technical ingenuity, he never settled down and fully exploited any of his means; to achieve any of these respectable goals would have tied him down. He died in Paris on April 1, 1976.