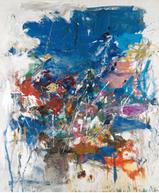 A leading figure of the second generation of Abstract Expressionists in New York City, Joan Mitchell said that although her paintings seemed total abstractions, they were, in fact, “about a feeling that comes to me from the outside, the landscape.”

She distinguished herself from other Abstract Expressionists because she had a pre-established design, a single image, to anchor her painting rather than leaving the result to subconscious, totally emotion-based expression.

Mitchell was born and raised in Chicago by parents who were wealthy and socially prominent. Her father was a successful doctor, and her mother a poet, and both supported her apparent early art talent. She attended Frances Parker School, a private high school whose faculty encouraged her interest in painting. For two years, 1942 to 1944, she enrolled in Smith College but was unsettled because she wanted to focus more on art. She transferred to the Chicago Art Institute, earning a B.F.A. in 1948 and an M.F.A. in 1950. There she was much influenced by the work of French modernist Paul Cezanne and Cubist painters.

From 1948 to 1949, Mitchell had a traveling scholarship to France, which was an unhappy time for her because her living conditions were a rat-infested, unheated apartment and her sense of direction about her artwork unfocused.

Joan Mitchell then lived in Greenwich Village in New York City, where she came under the influence of the Abstract Expressionists with whom she socialized at the Cedar Bar. She described them as “a group against the world”. She was particularly influenced by the work of Willem de Kooning, Arshille Gorky and Franz Kline and adopted their methods of strong, gestural brush-work and aggressive color.

In 1951, her paintings were chosen to be part of the Abstract Expressionists “Ninth Street Show”, and this exposure stirred much positive attention for her canvases. She had her first solo exhibition in 1952 at the New Gallery. A critic described her work as “heroic-sized cataclysms of aggressive color-lines in a savage debut that shows her moving further and further from Cubist order.”

Much of her painting during this time had calligraphic images, curving lines of green, purple and blue against whitish backgrounds. Some likened this expression to the movements she experienced as a child-champion ice skater in Chicago.

By the end of the 1950s, Mitchell like other Abstract Expressionists was finding less and less interest in her work because of the popularity of Pop Art and Minimalism. By 1959, she had moved permanently to France where she lived in relative isolation with Jean-Paul Riopelle, a Canadian painter, in Vetheuil, a village close to Paris. Their home was on a hill with a view of fields and water, and her paintings with colors of oranges, pinks and gold reflected the light she saw in the countryside.

Her painting schedule was to begin painting in the late afternoon and work throughout the night, listening to music and pacing around. Although her paintings have much energetic movement of line, shape and color, she painted slowly and carefully from preliminary charcoal sketches. The effect was spontaneity, but in fact, she was much in control, painting only about twenty canvases a year and discarding many that she judged inferior.

In 1973 she had a major one-woman show at the Everson Museum in Syracuse, New York, and in 1974 at the Whitney Museum.