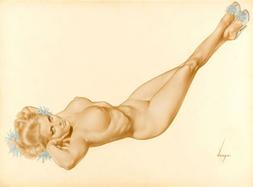 Alberto Vargas (1896-1982) was born in Arequipa, Peru, in 1896, the son of a successful photographer, and was educated in Switzerland. Arriving in New York in 1916, he was determined to stay in America and pursue what became an illustrious career.

His name has become synonymous with pin-up girls, but in the early 1940s, he was just a guy hired by Esquire magazine to imitate departed star George Petty, who bolted over pay. Vargas initially aped Petty’s sleek women with their telephone posing and large-hat lounging; soon, however, his own distinctive, delicate watercolor style emerged. His wide-eyed wonder- women rivaled Betty Grable as the ultimate pin-up girl of World War II.

Vargas, who signed his Esquire work “Varga”, had already achieved some notoriety for his Ziegfeld Follies and movie poster art. But Esquire made him famous, though he was paid poorly and, like Petty, eventually quit. Legal problems over ownership of his work, even of his own signature, plagued him.

But late in his life, Vargas was given a second shot at fame and fortune by longtime fan Hugh Hefner. His regular Playboy slot in the 1960s and ’70s elevated Vargas to a pinnacle eclipsing Petty.

One of the true giants of American illustration, Alberto Vargas has created an art style so sensuous, so exquisite, that for the past six decades his magnificent paintings of women have come to embody the fantasies of three generations of women and men around the world. His work also appeared in Harper’s Bazaar, Theatre Magazine, and Tattler.