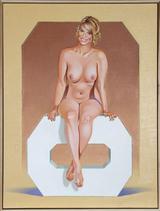 A California artist whose work reflects a variety of styles from Pop Art* to Surrealism*, Mel Ramos painted pretty, sexy women as pinups or trophies as well highly realistic, almost trompe l’oeil* landscapes. A typical example of his Pop style was Chiquita, oil on canvas, 1964.

Mel Ramos was born in Sacramento and attended Sacramento City College from 1954 to 1955 and San Jose State College from 1955 to 1956. He earned B.A. and M.A. degrees. As a student he painted symbolic, surrealistic works that were influenced by Salvadore Dali. He then experimented with Pop Art, abstraction including a series of variations on Willem de Kooning’s “Woman” paintings, and photo-real* landscapes whose tone was hard and steely.