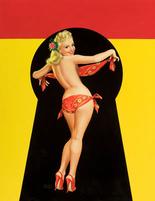 Peter Driben was perhaps one of the most productive pin-up artists of the 1940’s and 50’s. Although both Vargas & Elvgren have extensive catalogues of work, neither come close to the output of Driben.

Driben was born in Boston and studied at Vaesper George Art School before moving to study at the Sorbonne in Paris in 1925. His first known Pin-Up was the cover to Tattle Tales in October 1934, and by 1935 he was producing covers for Snappy, Pep, New York Nights, French Night Life and Caprice. His career went from strength to strength in the late thirties with covers for Silk Stocking Stories, Gay Book, Movie Merry-Go-Round and Real Screen Fun.

His career was not limited to magazine covers, he also worked in advertising and for Hollywood, perhaps his most famous work being the original posters & publicity artwork for The Maltese Falcon. Peter Driben was also a close friend of publisher Robert Harrison, and in 1941 was contracted to produce covers for Harrison’s new magazine Beauty Parade. Driben went on to paint covers for all of Harrison’s magazines, often having as many as six or seven of his covers being published every month.

Driben’s Pin-Up Girls are distinctive due to the bold colors he used, (usually red, yellow, blue and green), and the fact that most of the girl’s poses are designed to show as much leg as possible. In his later years Peter Driben turned, like many of his colleagues, to portrait and fine-art work, including a portrait of Dwight Eisenhower. His wife, Louise Driben, organized these works into several successful exhibitions.