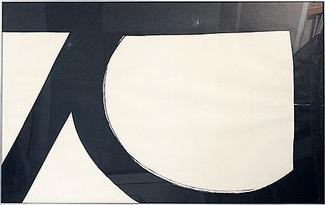 An abstract oil painter often using large, geometric forms with aggressive coloration, Al Held became a major figure in the New York art scene in the later part of the 20th century. His work is stark, usually large-scale, and much of its “in-your-face” forcefulness reflects his desire to bridge the division between viewers and his paintings.

He was born as Alvin Jacob Held in Brooklyn and grew up there and in the Bronx during Depression times when his Polish-Jewish family had a hard time financially. He was asked to leave high school because of chronic in-attendance, so he joined the Navy in 1945 and served for two years.

He began associating with people interested in “leftist” politics and art and attended the Art Students League from 1948 to 1949. Then with money from the G.I. Bill of Rights, he went to Paris and enrolled at the Academie de la Grande Chaumiere. Ossip Zadkine, Russian-born sculptor, was one of his teachers, and he had his first solo exhibition at Galerie Huit in Paris in 1952.

Until 1959, he painted in the Abstract Expressionist style, admittedly influenced by opposites–Jackson Pollock’s emotional, gestural involvement in painting and Piet Mondrian’s objectivity. He also went through a phase of Social Realism.

Between 1960 and 1967, Held changed from the heavy textures of Abstract Expressionism to tightly controlled geometric pieces, often giving the appearance of being suspended on the canvas by not touching the edges with color. Many of his works were black and white, exploring aspects of Analytic Cubism. His 90 foot “Albany Mural” in the Empire State Plaza in Albany, New York is a good example of this type of work.

From 1962 to 1978, he was a member of the art faculty of Yale University.
However, he mostly lived in New York City until the mid 1990s, when he went back and forth between homes in Boiceville, New York near Woodstock and Todi, Italy, where he died at age 76 on July 26, 2005 in his swimming pool.

By the 1980s, with the resurgence of realist art, the market for his paintings became less active. But he kept painting, and many of his works were too large to fit into galleries. His painting “Requiem” measured 15 feet high and more than 60 feet in width and was exhibited at P.S. 1 Contemporary Art Center in Queens in 2002.

At the time of his death, Al Held was working on a mural commission for the Jacksonville Public Library in Florida, stained-glass windows for the Federal District Court in Orlando, Florida and a mosaic for the subway stop at Lexington Avenue and 53rd Street in Manhattan.