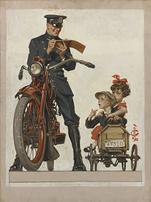 Born in Montabaur, Germany, Joseph Leyendecker became a noted American illustrator and graphic designer who, between 1896 and 1950, painted more than four-hundred magazine covers, most of them of an idealized America and 321 for Saturday Evening Post. He particularly hit his stride in the 1930s.

For Arrow Collar he designed ads that laid the foundation for selling lifestyle with product. It is said that his technical skill was beyond reproach, he worked amazingly fast, and that his draughtsmanship was perfect. Norman Rockwell began his career as an imitator of Leyendecker.

Leyendecker came to Chicago with his Catholic family at age eight. He apprenticed to a printer, J. Manz and Co., and then studied with John Vanderpoel at the Chicago Art Institute. In 1896, he won the Century magazine cover competition, which essentially launched him professionally. Two years later, he went to Paris to the Academie Julian with his brother, Francis Xavier, and they learned the “hachure” method of drawing whereby blended shading was not allowed. It was a time when poster art was very popular, and when he returned to America, he applied these new methods to their commercial ventures.

With a secret recipe combining oil and turpentine, he and his brother, Frank, perfected a cross-hatch method of working in oil paint that gave the speed of pencil and the visual impact of color without the brush going dry. Many other artists were jealous of this method which allowed the brothers to work more quickly than their peers.

He was exceedingly shy, spoke with a stutter, and was a homosexual in an era where he would have been ruined professionally if it had been widely known. He lived as a recluse and drove himself very hard, something that began when he and his brother had decided to try to outdo each other in productivity. They made great amounts of money and built themselves a mansion in New Rochelle with separate quarters for each of their studios. The place had a large staff and elaborate landscaping, but they competed so heatedly with each other that eventually the brothers split and Frank died at age forty six from suicide involving drugs and depression.

J.C. landed the Kuppenheimer Clothes and Arrow Collar accounts, which fit his interest in fashion advertising, and for over twenty years he worked for them on big budgets. For Arrow, instead of focusing on the clothes, he drew the attention of the viewer to the face of the man wearing the shirt, and these men were clean shaven, preppy and handsome. One of the models, Charles Beach, became J.C.’s companion, agent, and publicist from 1903 to the end of J.C.’s life. In 1923, he wanted to marry a woman who had posed for him, but Charles threatened to expose his homosexuality and J.C. pulled back.

The Arrow Shirt illustrations ended with the Depression. Simultaneous to them had been his Saturday Evening Post covers, and he became that magazines top cover artist.

He did not use photographs but always employed models. In contrast to Rockwell who focused on the personality of his subjects, Leyendecker did figures that were personages symbolic of something rather than human beings facing real-life situations.

Throughout his life he worked hard, but when he died in 1951, he left no savings and only part of a divided estate to Beach who had to resort to selling Leyendecker’s sketches for money. People bought them because they were in awe of the illustrator’s mastery, and from May to November, 1997, a special exhibition of those sketches was held at the Norman Rockwell Museum in Stockbridge, Massachusetts.