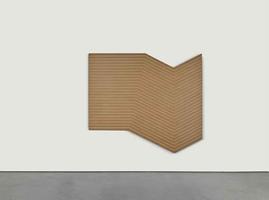 Frank Stella was born in Maiden, Massachusetts, studied at Phillips Academy, Andover, and then at Princeton University. One year after his graduation in 1968, he was included in an exhibit, “Sixteen Americans”, at the Museum of Modern Art in New York. The following year, his shaped canvases were the basis of his first one-man show at the Leo Castelli Gallery.

Stella’s work is concerned with regulation of structure and color. His first prints were often modestly scaled and monochromatic. He followed the compositions of his paintings, but was traditional in his approach to the graphic media. Then, in the early 1970s, he moved away from flat geometric shapes toward illusionism, with liberal uses of color. Later, he experimented with combinations of shapes, colors, and techniques in print series, which are an incredible number of variations on a theme.

Today, his prints no longer follow his paintings-they are uniquely inventive and visually exciting in themselves. Stella is one of the most important contemporary printmakers. Highly acclaimed, both critically and popularly, his work has been exhibited in the most prominent American and British galleries and is included in prestigious public collections thoughout the world.