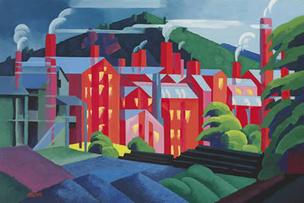 Born near Hanover, Germany, Oscar Bluemner early followed in the architectural careers of his father and grandfather. In the early 1880s, he studied painting and architecture at the Royal Academy of Design in Berlin and then traveled to America hoping unsuccessfully for an architectural commission with the 1893 World Exposition in Chicago.

He did win a competition in 1900 for the design of the courthouse in Bronx, New York, but his partner stole the commission from him. Eventually he won a lawsuit against the partner, but by then he had turned to painting and away from architecture. Bluemner first adopted the impressionist style and urban subject matter of Maurice Prendergast, but after a trip to Europe, his style changed drastically to that which was geometric and reflected Cubism and Futurism.

His work was well received by the critics, especially when he was endorsed and promoted by Alfred Stieglitz who sponsored Bluemner’s first American exhibition. However, sales were not strong during most of his career. As he suffered increasing poverty and poor health, he became more and more depressed and committed suicide in 1938.

From 1926, he had lived in Braintree, Massachusetts.

Source:
Peter Falk, Who Was Who in American Art
Matthew Baigell, Dictionary of American Art