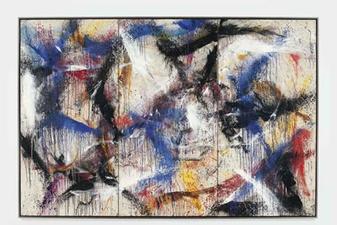 An Abstract Expressionist, Norman Bluhm was born in Chicago in 1921, although as a child he lived in Italy for eight years. His principle education was architecture, and he studied at the Illinois Institute of Technology with Mies van der Rohe. He also studied briefly in Florence before moving to Paris in 1947 to continue studies at the Ecole des Beaux-Arts, where he was exposed to the ideas of the Bauhaus philosophy of bringing together aesthetically arts and crafts.

Prior to and after his studies, Bluhm was a member of the Air Force and served in World War II. After World War II, he lived in Paris with other hopeful American writers and artists of the expatriate scene. There he developed an interest in nude painting.

In 1956 he moved to New York. The Cedar Tavern was a favorite gathering place where he convened with other painters and writers, such as Frank O’Hara, Franz Kline, William de Kooning, and Jackson Pollock. Among the work of this noted group were the twenty-six Bluhm-O’Hara spontaneous poem paintings, composed in Bluhm’s studio atop the old Tiffany Glass Building in 1960. New York University owns the majority of these poems.

The Corcoran Gallery in Washington, D.C. exhibited Bluhm’s work in his first museum show in 1969. During the 1960s and 1970s, his art created an atmosphere of violence, with a large paint-soaked brush, often using blues, pinks, purples and greens. His work which featured webs of jagged marks, cascading drips and violent splatters of paint, increasingly took on the energy and scale of abstract expressionism. Later his violent outlook changed, as did his style. He has exhibited his works throughout the United States and Europe.

A vigorous man with a viselike handshake, he looked and acted twenty years younger. Bluhm died suddenly on February 3,1999 of heart failure in East Wallingford, Vermont. His studio was filled with paintings about to be shipped to the Butler Institute of American Art in Youngstown, Ohio