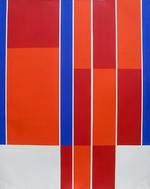 For nearly six months, the men of Ward B-11 watched restorers chip and dissolve their way through seven coats of institutional paint. They breathed the mingled odors of solvent and hospital food. They wondered at the stream of important-looking visitors to their day room.

And they witnessed the resurrection of a 1941 landmark of abstract art in America.

It is a mural by the Russian-born artist Ilya Bolotowsky in the circular day room at Goldwater Memorial Hospital on Roosevelt Island. The 350-square- foot assembly of lines, right-angled shapes and pastel colors has undergone a complete restoration, which was completed on Monday.

The mural lay hidden and forgotten for decades, a victim of the passive neglect of bureaucrats, until it was featured in 1991 by the Municipal Arts Society’s Adopt-a- Mural program and funding was pieced together for the restoration.

“It’s an absolutely wonderful thing,” said Andrew Bolotowsky, the artist’s son. “My father was very serious about this particular work, as he was about all his works. It was very dear to his heart.”

In his lifetime, Bolotowsky, one of the nation’s first important abstract painters, knew his mural had been painted over. But he did not speak about it often, his son said. “The things that were most important to him, he was quiet about,” Andrew Bolotowsky said.

In 1981, Bolotowsky began reproducing the mural as an acrylic painting, but he died before finishing the canvas. The mural faded from memory. Now it is back, and the tale of its excavation carries a fair number of twists and turns. So did the life of Bolotowsky.

Bolotowsky (boh-loh-TUFF-skee) was born in 1907 in St. Petersburg, the son of a lawyer and an artist. The family fled the Russian Revolution for Constantinople, and immigrated to the United States in 1923. Bolotowsky attended the National Academy of Design in New York, served in the Army as a technical translator in Alaska, made movies, and wrote plays and short stories.

He had a Balkan-style mustache and a photographic memory. He played Bach slowly and romantically on the harpsichord. For exercise as a young man, Bolotowsky would walk from Manhattan to Tarrytown, N.Y., and back. As a father, he would take his son on walks lasting hours to lectures on “anything and everything,” Andrew Bolotowsky said.

Bolotowsky was a founder, in 1936, of American Abstract Artists, a group that included Piet Mondrian, Ad Reinhardt and George L. K. Morris. They created purely abstract art in a style that came to be known as Neo-Plasticism.

Like many abstract painters of his time, Bolotowsky is not very well known, said Debra Balken, a historian of American modernist art and independent curator. But scholars and art lovers are beginning to rediscover the period.

As Bolotowsky was beginning American Abstract Artists, the Federal Works Progress Administration commissioned him to create a mural, one of the first abstract murals in the country, for the Williamsburg Housing Project in Brooklyn.

The W.P.A. also hired him to paint a mural at the hospital, at the time called the Hospital for Chronic Diseases, on what was then called Welfare Island. Bolotowsky was a second choice. (Wiser heads prevailed when the first choice, Byron Browne, proposed a photomontage of vigorous young athletes, perhaps not ideal for a hospital that was built in 1939 for tuberculosis patients.)

“The most suited design for a hospital mural should contain no definite subject matter but should be generally soothing in its line and color,” Bolotowsky wrote in his proposal.

In the post-World War II years, institutions lost a taste for government-funded art, particularly abstract works, and many of the hundreds of W.P.A. murals in New York fell on hard times. Bolotowsky’s mural was painted over.

Samuel Lehrfeld, the executive director of Goldwater, part of the Coler- Goldwater Specialty Care Hospital and Nursing Facility, has served in some capacity at the hospital since 1972. He said he learned about the mural’s existence somewhere on the grounds in the early 1980’s. “If we had seen that mural, and if anybody had painted it, there would have been somebody dead here,” he proclaimed.

Bolotowsky embarked on his project to recreate the work, plus two others feared lost, in 1979.

A lucky stroke helped. Years earlier, Jackson Pollock came across a scaled- down preliminary version of the mural in a pile of W.P.A. materials, Andrew Bolotowsky said. Pollock retrieved it; his wife, the artist Lee Krasner, later donated it to the Guggenheim Museum. Bolotowsky photographed the scale version to use for his acrylic reproduction.

On a gray November day in 1981, as he was on his way to let in a visitor, Bolotowsky stepped through the manually operated doors of the freight elevator at his Lower Manhattan loft. He was unaware that the elevator was at the ground floor; he plunged down the shaft and died. Andrew Bolotowsky still has the charcoal sketch his father was working on at the time for the central panel of the mural reproduction.