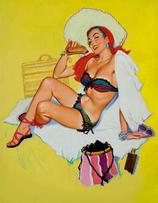 Arnold Lupo Kohn was born on December 26, 1920 in Chicago, Illinois. His father, David Lupo Kohn, was born 1886 in Roumania. His mother, Jennie R. Kohn, was born 1894 in Russia. His Jewish parents emigrated to America and met in Chicago, where they married in 1918. They had two children. His younger sister Cecil Lupo Kohn was born in 1925. They lived at 6953 South Halstead Street. His father was a salesman at an auto parts store.

Arnold Kohn attended public school in Chicago and developed an interest in art. He was unusually small, intelligent and opinionated. These traits earned him the childhood nickname “Napoleon.”

On December 19, 1937 he was awarded honorable mention in the 3rd Annual Chicago Commerce Association student art show. The art jurists were the celebrated illustrators Andrew Loomis and Haddon Sundblom.

In June 1938 Arnold Kohn graduated from Francis Wayland Parker High School, where he had been the Art Editor of the school year book, which he profusely illustrated. He was a member of the school’s Honor Society and the Debating Squad.

After graduation he worked as a salesman and clerk at his father’s newly-opened bicycle repair shop. He also attended weekend classes at a Chicago art school.

Although he wanted to serve in the armed forces during WWII he was rejected because of poor eyesight, which required him to wear powerful prescriptive glasses throughout his life.

In the 1950s he painted pin-up art for men’s adventure magazines and calendars. He was an early contributor to Playboy magazine, which was also produced in Chicago.

In 1956 he married Shirlee Jean Rice, a famous night club singer, who performed with Big Bands at the Millionaires Club under the stage-name Carol Lane. She also hosted a popular radio show “A Serenade at Night” that was broadcast coast to coast on WBBM. She was born in Chicago on August 8, 1927. Her father was the stage manager of the Ambassador Theater, so she grew up in an artistic family.

The newlyweds moved to a Chicago apartment on Chappel Avenue and later moved to an apartment on Ogelsby Avenue, where they raised two children. Their son David was born in 1960 and daughter Mari in 1963.

According to the artist’s son, “My sister and I were often pressed into service as models for projects. Dad posed us in outfits appropriate to the subject, while he snapped a Polaroid for reference. I have vivid memories of one such session in a summer when he was illustrating a Patty Duke Mystery novel for Whitman Publishing, which was some sort of North Pole adventure. In mid-July temperatures, I stood in the backyard wearing a full-length winter parka and brandished a hockey stick to represent an ice-scythe or something. It probably lasted only fifteen minutes, but it seemed to me like an eternity! I remember yelling, ‘Dad, could you please hurry up and take the photos so I can get out of this god-damned parka!'”

In 1965 the Kohn family moved to 55 Shenandoah Road in Deerfield, Illinois, where their children could attend Deerfield High School.

In 1975 he illustrated a popular series of Doc Savage novels, which were abridged and revised for juvenile readers by Golden Press.

In his later years he was an art director of textbooks and encyclopedias at United Educators Inc., of Lake Bluff, IL.