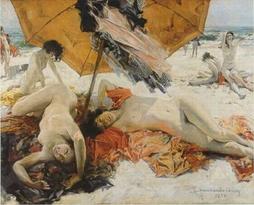 Howard Chandler Christy’ was one of America’s most distinguished illustrators, whose work, like that of Norman Rockwell, successfully captured the pulse of the nation.

His career was established when he worked for Scribner’s and Leslie’s Weekly doing illustrations of American troops in Cuba during the Spanish American War. After that, he was most sought after for his sumptuous, lush portraits of women, although he also painted other notables that included President Calvin Coolidge, General Douglas McArthur, Eddie Rickenbacker, Douglas MacArthur, Amelia Earhart, Herbert Hoover, and Benito Mussolini.

He was also a muralist and much sought-after teacher, giving classes in New York City at Cooper Union, the Chase School, the New York School of Art, and the Art Students League.

Christy was born on January 10, 1872 in Morgan County, Ohio as reflected in the court records of that county. Thus the often cited birth date of 1873 seems to be an error, likely perpetuated by Christie himself, as he stated that 1873 was his birth year in his 1920’s passport and even on a handwritten letter that he penned. Only in his later years did Christy learn that he was born in 1872, not in 1873 as he had thought. By that time, the damage had been done, and the public believed he was born in 1873. However, one only has to look at his gravestone at Ferncliff Cemetery in Westchester, New York to unravel the century old mystery. It says he was born in 1872.

Christy grew up on his family farm. At age sixteen, he went to New York City to study at the Art Student’s League, and after less than four years, he entered the National Academy of Design where he won two prizes in draughtsmanship.

He worked for Scribner’s Magazine as an illustrator for a number of years beginning in 1898. In addition to illustrating articles and stories, he traveled to Cuba and Puerto Rico and sent back illustrations of Spanish-American War activity. It was through this work as a commercial artist that he became a nationally known illustrator.

After his return to the United States, he taught for a brief time in New York; however, he soon returned to his hometown of Duncan Falls. There he built a studio and summer home and divided his time between painting and entertaining visiting authors and publishers.

While living in Ohio, he became famous for his stylized depictions of women, popularly known as “Christy Girls.” These illustrations appeared in many publications and print art, and were eventually used on recruitment posters for Word War I.

By 1915, he had returned once again to New York City and soon took up portrait painting. Later in life Christy began painting large historical murals. In 1945, he was commissioned by the state of Ohio to paint The Signing of the Treaty of Greene Ville, which today hangs in the Ohio Statehouse in Columbus. His most famous of these large compositions, The Signing of the Constitution of the United States is located above the grand staircase in The Capitol in Washington DC.

Christy died in 1952 at his apartment in New York.

Sources:
The Ohio Historical Society
The Illustrator in America, 1880-1980 by Walt and Roger Reed