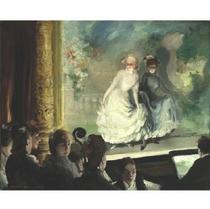 A prominent New York-based artist in the early 20th century, Everett Shinn was a Social Realist painter who focused on lower-class urban themes. Although his ongoing reputation seems to be for Social-Realist subjects, his real interest was in the theatre and in creating images celebrating the spectacle. From 1917 to 1923, he worked as art director for Metro Goldwyn Mayer and other studios and wrote, produced and created scene designs for plays held at his own 55 seat theatre in his New York City home. He was also a cartoonist and illustrator including work for twenty-eight books and ninety-four magazine stories. “A brash and often flamboyant character, he went through a series of marriages and divorces.” (Falk)

Shinn was born in Woodstown, New Jersey, and studied industrial design and basic engineering at Spring Gardens Institute in Philadelphia. From 1893 to 1897, while working for a gas fixtures company in Philadelphia, he attended the Pennsylvania Academy of the Fine Arts as a student of Thomas Anshutz. He then worked as a staff artist for the Philadelphia Press with George Luks, William Glackens, and John Sloan, and this group, part of the future “Eight,” centered around Robert Henri’s Philadelphia studio.

In 1897, Shinn began working for the New York Herald and shortly after started a series of murals including panels for the Stuyvesant Theater and industrial depictions for the Trenton, New Jersey City Hall.

Based in New York, he traveled extensively and also did theater and film work. In 1949, he was elected an academician of the National Academy.

Source:
Matthew Baigell, Dictionary of American Art
Peter Falk, Who Was Who in American Art