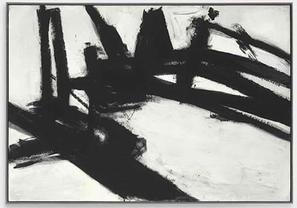 Born in Wilkes-Barre, Pennsylvania, Franz Kline became one of the most prominent 20th-century American artists working in abstract and non objective styles. His name is most associated with large-scale black and white paintings, and these linear abstractions brought him his first notable public attention in 1950 when they were shown in New York City. Of these paintings with no coloration, Kline said: “People sometimes think I take a white canvas and paint a black sign on it, but this is not true. I paint the white as well as the black, and the white is just as important.” (Herskovic 186)

Franz Kline began his career as a figure and landscape painter, and studied in the Art Department of Boston University from 1931 to 1935 and Heatherley School of Art in London from 1937 to 1938. He then settled in Greenwich Village of New York where he painted in realist style the local scenery including street scenes and Bohemian night clubs. Some of these in 1940 included Bleeker Street murals of jazz musicians but were not focused on social conditions but on American scenes, which was the prevalent style of that time.

In 1946, he did his first abstract work, and in 1949, became committed to Abstract Expressionism when a friend put several of his small sketches into a projector, magnifying the bold linear strokes and making obvious his talent for that style. From that time, he often used a “Bell-Opticon enlarger to project forms on a wall as a means to abandon representation.” (Baigell 196). Much of Kline’s early abstraction was black and white with boldly geometric lines cut with asymmetry and opening edges. Later his lines became much thicker and his forms slablike. He used brushes up to eight inches in width.

Abstract Expressionist Willem de Kooning was especially encouraging to Franz Kline. who by 1950, was producing large-scale Abstract Expressionist works with calligraphic images in black on white ground. From 1958, his gestural paintings had bold coloration. It was written that “his use of color had the effect of slowing down the velocities of his great bars and color sections.” (Baigell 196).

Many of his works were done with wide house-painter brushes, heavily loaded with paint across large canvases.

Although primarily a painter, Franz Kline taught briefly at Black Mountain College in 1952; Pratt Institute in 1953; and the Philadelphia Museum School in 1954. From the late 1950s until his death, Kline was also active in Provincetown, Massachusetts. He died in New York City in 1962.

Sources include:
Matthew Baigell, Dictionary of American Art
Peter Hastings Falk, Editor, Who Was Who in American Art
Marika Herskovic, Editor, American Abstract Expressionism of the 1950s: An Illustrated Survey