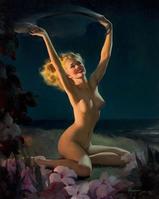 Gil Elvgren was a great pin-up artist and a master storyteller whom some called “the Norman Rockwell of cheese-cake.” His heroines are often caught in humorous but distressing situations that cause their skirts to rise and our eyes to follow. Many of his commissions were with the Coca Cola company.

Born in St. Paul, Minnesota, Elvgren attended University High School, and after graduation, he began studying art at the Minneapolis Art Institute. Some of Gil’s fellow students were Coby Whitmore, Al Buell, Andrew Loomis, Ben Stahl and Robert Skemp, many who would later work for Coca Cola, as would Elvgren.

He graduated from the Institute during the Depression at the age of twenty-two and joined the stable of artists at Stevens and Gross, Chicago’s most prestigious advertising agency. He became a protégé of the monumentally talented Haddon Sundblom, who was most famous for his Coca Cola Santas.

In 1937, Gil began painting calendar pin-ups for Louis F. Dow, one of America’s leading publishing companies. These pin ups are easily recognizable because they are signed with a printed version of Elvgren’s name, as opposed to his later cursive signature.

Dow paintings were often published first in one format, then painted over with different clothes and situations. These ‘new’ paintings were then republished and distributed to an unsuspecting public.

Around 1944, Gil was approached by Brown and Bigelow, a firm that dominated the field in producing calendars and advertising specialties. They offered him $1000 per pin-up, which was substantially more than Dow was paying him. Elvgren signed on with B&B, and his Brown and Bigelow images all contain his cursive signature.

By the terms of Elvgren’s contract with B&B, he would turn out twenty calendar girls each year, ranging from cowgirls of the golden west to sultry sirens of the Riviera. Elvgren looked for models with vitality and personality, and chose young girls who were new to the modeling business. He felt the ideal pin-up was a fifteen-year-old face on a twenty-year-old body, so he combined the two.

An Elvgren model was never portrayed as a femme fatale. She is, rather, the girl next door whose charms are revealed in that fleeting instant when she’s been caught unaware in what might be an embarrassing situation. Gusting winds and playful plants grab at her lovely, long legs. She is intruded upon as she takes a bath. Her skirts get caught in elevator doors, hung up on faucets, and entangled with dog leashes. The elements conspire in divesting her of her clothing.