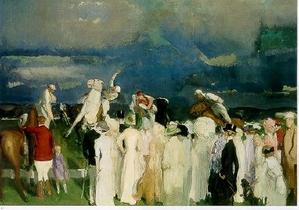 Born in Columbus, Ohio, George Bellows was a major American artist of the early 20th century, known for his paintings of boxing match figures and for his lithographs, numbering nearly two hundred, of his paintings. He became an instructor in New York at the Art Students League and at the Art Institute of Chicago.

He graduated from Ohio State University in 1903 and then attended the New York School of Art where he studied with Robert Henri, Kenneth Hayes Miller, and Hardesty Gilmore Maratta. Henri inspired him to treat urban subjects in a realist, painterly manner, and between 1906 and 1913, he produced a number of scenes from New York life that defined his fine arts career. In 1908, he won a prize at the annual show at the National Academy of Design, the first of many honors during his life. Bellows also worked as a newspaper and magazine illustrator and won early acclaim for those activities.

He was elected to the National Academy of Design, but he was part of the group that rebelled against them in 1919 with the Exhibition of Independent Artists and the 1913 Armory Show.

In 1920, he settled in Woodstock, New York where he purchased property next to his good friend Eugene Speicher and lived during the summers until his early death from a ruptured appendix in 1925.