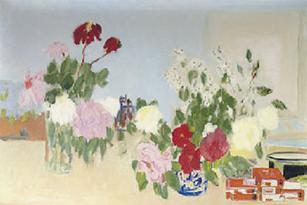 Jane Freilicher, a stubbornly independent painter whose brushy, light-saturated still lifes and luminous landscapes set in the marshes of eastern Long Island made her one of the more anomalous figures to emerge from the second generation of Abstract Expressionists, died on Tuesday at her home in Manhattan. She was 90.

Eric Brown, co-owner of the Tibor de Nagy Gallery in Manhattan, which represented her, confirmed her death.

Although Ms. Freilicher (pronounced FRY-licker) studied with Hans Hofmann, the influential teacher and theorist of abstraction, she put her expressionist style of paint-handling and allover approach to the canvas at the service of recognizable images, a course that made her an outsider in an era dominated by abstraction.

Influenced by Bonnard, Vuillard and Matisse, she took as her subject matter the cityscape outside her Greenwich Village penthouse apartment, interiors with still life objects and, after she began spending summers in Water Mill, N.Y., in the 1950s, the marshes and potato fields of eastern Long Island.

Her forms were indicated with quick strokes and minimal definition of shape. Her bright palette gave her work a vibrant, joyful quality that some critics held against her. Ms. Freilicher, it seemed, took too much pleasure in the visible world and delivered too much of it to her viewers.

A romantic by temperament, she agreed wholeheartedly with a remark by the English painter John Constable that “painting is but another word for feeling.” Her own works, she told ARTnews in 1985, were “an emotional reaction to something I find beautiful in the subject, which provides the energy, the impetus to paint.”

She continued: “I’m quite willing to sacrifice fidelity to the subject to the vitality of the image, a sensation of the quick, lively blur of reality as it is apprehended rather than analyzed. I like to work on that borderline — opulent beauty in a homespun environment.”

She was born Jane Niederhoffer on Nov. 29, 1924, in the Flatbush neighborhood of Brooklyn and grew up in Brighton Beach. At 17 she eloped with Jack Freilicher, a jazz pianist who played with the Army band at West Point during World War II. Through him she met another musician, Larry Rivers, whom she influenced to become a painter and with whom, after her marriage was annulled in 1946, she had a romantic relationship.

She studied art at Brooklyn College, where she earned a B.A. in 1947, and Columbia, where she received a master’s degree in art education in 1948. The critical influence on her development, however, was the time she spent with Hofmann at his schools in Manhattan and Provincetown, Mass. — an apprenticeship she undertook, with Rivers, at the urging of the artist Nell Blaine.

In 1957 she married Joseph Hazan, a wealthy clothing manufacturer, former dancer and Sunday painter, who died in 2012. She is survived by their daughter, Elizabeth Hazan.

Ms. Freilicher had her first solo show at the Tibor de Nagy Gallery in 1952. In a review for ARTnews, the painter and critic Fairfield Porter called her work “traditional and radical.” Her paintings, he wrote, “are broad and bright, considered without being fussy, thoughtful but never pedantic.”

Ms. Freilicher also counted among her circle of admirers the New York poets Frank O’Hara, James Schuyler, Kenneth Koch and, above all, John Ashbery, who wrote frequently about her work and was the first to buy one of her paintings.

The dominant style at the time was Abstract Expressionism. Ms. Freilicher, briefly in the late 1950s, produced landscape paintings strongly influenced by Color Field painting, but she could not banish imagery from her work.

“Realism is the only way I can do it,” she told Mr. Porter, who became a good friend as well as a critical champion, in a 1956 ARTnews article. “Every so often I get an anxious feeling and would like to produce that bombed-out effect of modern painting. Maybe my form is too closed. I feel a certain desire for exploding a picture the way some artists do. Can you explode a painting realistically? I don’t know.”

Although she exhibited at blue-chip galleries, primarily Tibor de Nagy and Fischbach, Ms. Freilicher achieved only a modest level of fame in a career that lasted more than a half-century, although the revival of interest in figurative painting in the mid-1970s brought her in from the margins somewhat.

The prevailing critical current, for most of her career, devalued the landscape and still-life genres. In landscape, what Mr. Ashbery called her “sweetness of tone” drew unfavorable comparisons with Mr. Porter’s moodier treatment of similar scenes.

“My work was deviant enough to explain why I was not rising through the ranks,” she told The New York Times in 1998. “But I liked not having the demands made on me a big career would have made. It allowed me a certain freedom to fool around.”

After Ms. Freilicher and her husband built a house in Water Mill, her painting life oscillated between winters in Manhattan, source of her cityscapes and interiors, and summers on Long Island, specifically the marshes and fields around Mecox Bay, whose light and flat expanses she captured with such immediacy.

Often she combined still life and landscape, balancing interior and exterior views. A table with plants in small containers dominates the foreground of Small 12th Street Still Life (1976), with a busy streetscape in the background visible through a divided window.

Similarly, in Window on the Marsh (1982-83), a flower-filled vase on a table sits in the center of the foreground, placed in front of picture-window frames that look out on an expansive view of the marshes of Mecox Bay.

With time, the brushy bravura of her early work evolved into a more lyrical style that evoked the subtleties of visual perception. The themes remained the same, but the sensibility mutated. In a review for The Times of a survey exhibition at Tibor de Nagy in 2005, Ken Johnson referred to one of her later interior-exterior landscapes, blending domestic intimacy and sweeping vistas, as “Emily Dickinson pining for Walt Whitman.”

She once compared her plunge into painting to the taking of religious vows. Her fluctuating value in the critical stock market never seemed to bother her. She told the museum director Robert M. Doty, “To strain after innovation, to worry about being on ‘the cutting edge’ (a phrase I hate), reflects a concern for a place in history or one’s career rather than the authenticity of one’s painting.”