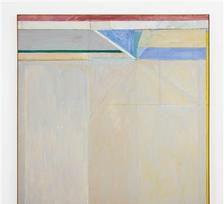 When he was two, his family moved to San Francisco. His grandmother encouraged Diebenkorn’s early art talent, and he remembered often drawing locomotives on shirt cardboards as a child. He was also intrigued with medieval heraldry and the French Bayeux Tapestries. Late in life, he reminisced about the tapestries: “The main events are central and in flanking panels above and below, … dead men and coats of arms; dialogues paralleling one another, horizontally.” (C.Horsley).

In 1940 he entered Stanford University, where he studied oil painting with Victor Arnautoff and Daniel Mendelowitz. In 1946 he enrolled at the California School of Fine Art, where he met artists David Park and Elmer Bischoff. At the CSFA Diebenkorn was befriended by Park, both an artist and teacher, who was wary of some New York artists’ ‘egocentrism’ that he found in ‘The Doctrine of Action Painting’ and Abstract Expressionism. Diebenkorn’s work from this period was first exhibited at a solo exhibition at the California Palace of the Legion of Honor in 1948. In the 1940’s, Diebenkorn also traveled to New York, immersing himself in the Abstract Expressionist milieu, and becoming familiar with the works of Robert Motherwell, Bradley Tomlin Walker, and William Baziotes. In New York he also became interested in jazz, even to the point of taking up, briefly, the trombone. Diebenkorn received his undergraduate degree from Stanford in 1949, and in 1950 left the Bay Area to attend University of New Mexico at Albuquerque, where he received his MFA in 1951. While in New Mexico, he became fascinated with aerial vistas.

He served in the active reserves during World War II, and in 1953 returned to study some more at Berkeley, where he remained for several years. There he studied with abstract expressionist, Hans Hofmann. Other artists who were influential to Diebenkorn include Edward Hopper, Paul Cezanne, Piet Mondrian, Arshile Gorky, Willem de Kooning, Mark Rothko and Henri Matisse. During these years, Diebenkorn made trips with his wife, Phyllis, to the Phillips Collection in Washington D.C., where visitors could sit, smoke (at that time), talk and absorb the works of Albert Pinkham Ryder, Pierre Bonnard and Matisse, among others. Diebenkorn was particularly stuck by the pentimenti (traces of underlying pigment) in some of the Matisse pictures.

Pentimenti are frequently found in Diebenkorn’s works, and these and other ‘human touches’ could almost appear as errors, or mistakes, but rather are very important to his art, adding a painterly touch. His ‘crudities’, as he called his intentionally left splotches and pentimenti, are his touchstones of frailty, perhaps even frustration.

His renunciation of abstraction for more realistic figures was the beginning of the Bay Area figurative school, an alternative to the mainstream. A typical Diebenkorn figure is usually a woman in a room, often with his wife, Phyllis, posed as the model. Usually the figures are expressionless, lonely, and acquiescent seeming. David A. Ross, the director of the Whitney Museum, observed that “Diebenkorn emerges at the century’s end as an artist who restored to late modernism the sense of the sublime that seemed to fade with each successive decade after World War II.”

Diebenkorn made a switch from abstractions to figurative work for most of the 1960’s. Then, in the late 1960s, he returned to abstraction, shifting planes of color, inspired by seeing Matisses at the Hermitage in Russia. This influence led to his noted Ocean Park series, begun in 1967 after moving to Santa Monica, and which he continued to work on for decades, ultimately resulting in close to 200 works. He began teaching at UCLA in 1966 and remained there until 1973. In 1978 he represented the United States at the Venice Biennale.

In the early 1980s, he began the closing chapter to his work, which included the depiction of heraldic emblems in collage and gouache. Diebenkorn moved in 1988 from Santa Monica to Healdsburg in northern California, where he continued to create primarily small works, some of them drawings, until his death in 1993. He experimented with different materials and smaller scale, sometimes executing paintings on cigar box covers. His technique also changed and some of the works seemed to have a fluid undercurrent and a sort of Byzantine, or Sienese, sense of ornamentation. Two years before his death in 1993, he painted Untitled No. 10, a horizontal work that is a design for a beautiful flag, a new vision that might have led to a major series important as Ocean Park. In 1991 he was the recipient of the National Medal of Art, and his work was the subject of a major retrospective exhibition.

Sources:
Michael David Zellman, 300 Years of American Art
website of the Allen Memorial Art Museum of Oberlin College
website of the Whitney Museum of Art
Carter B. Horsley, author of Strength in Reserve -Tension Beneath Calm; website of thecityreview.com.